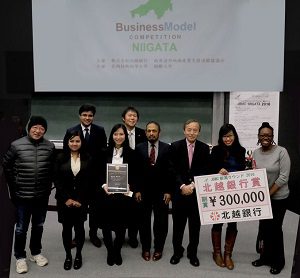 One of the IUJ’s teams came out winner with its project titled “Hanoi Zstore”, network for the swap of consumer items receiving the Hokuetsu Bank Prize; and the Niigata University team presenting “Ehon Catalogue”, picture-book type wedding catalogue, was selected the winner of iClove Prize. Both Prizes were endowed with a ¥300,000 cheque, supported by Minamiuonuma City and Hokuetsu Bank.

The two winning teams will join the final competition for JBMC Prize in February 2017 in Tokyo, which will allow its winner to join the final world-wide International Business Model Competition to be held at Harvard University in Boston.
Let’s extend our warmest congratulations to  Ha Phung and Vo Nguyen for their achievement and wish them good luck at the next stage of competition. IUJ also wishes to express its appreciation for Professor H. Ito’s and Professor J. Rajasekera’s efforts in organizing ICLOVE events, including this Business Model Competition.

The Info. Session in Delhi, India on December 17
Scroll to top