Blog - Latest News
You are here: Home / News / Announcements / IUJ Students Awarded by Mayor on a Stage Made of Snow

IUJ students were honored by the Hon. Mr. Hayashi, new mayor of Minamiuonuma City and the City’s Tourism Department for their outstanding contribution to our area on Saturday, February 11, 2017. About 30 students who took the “Foundation of Web Technologies” E-Biz class were invited to an awards ceremony held in conjunction with the 67th Snow Festival. They were recognized on a stage made of snow for their creation of promotional websites, with social media interactions, that showed off the many attractions found in Minamiuonuma City area. 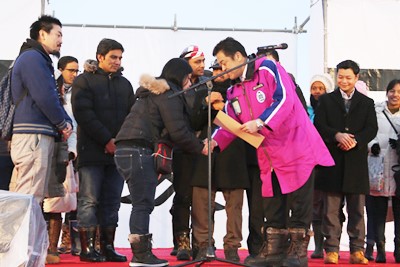 In the fall term 2016, in response to a request from Minamiuonuma City, the students of the “Foundation of Web Technologies” class, divided into 6 internationally diverse groups, created websites. This time the main theme was “Tour Packages” that look attractive to foreign tourists.

Group No. 1, represented by energetic team members Jean Marinduque, On-nicha Phunphorn, Tomoyuki Akita, Haseeb Khalid, Putra Endi won the 1st prize of the web contest, while Group 2 and Group 5 won the 2nd and 3rd prizes. But, city presented awards to the entire class of about 30 students.

At the awards ceremony, every participating student and their course professors were invited up on the snow stage. The MC asked IUJ Vice President and GSIM Professor Jay Rajasekera for his comments. Prof. Rajasekera first thanked the people of Minami Uonuma City, including Mr. Abe from the Tourism Department of the City, for introducing this project to IUJ, and said that students could learn not just technology, but also how to work with the community and learn a bit about Japanese culture and history as well. GSIM E-Biz Professor Zaw Zaw Aung who co-taught the course and involved with several projects with the city, including ICLOVE, also expressed his appreciation to the city. Event was also attended by GSIM Finance Professor Ito who is also a major contributor to ICLOVE and various city activities. GSIM Marketing Professor Sharkasi also attended the event. 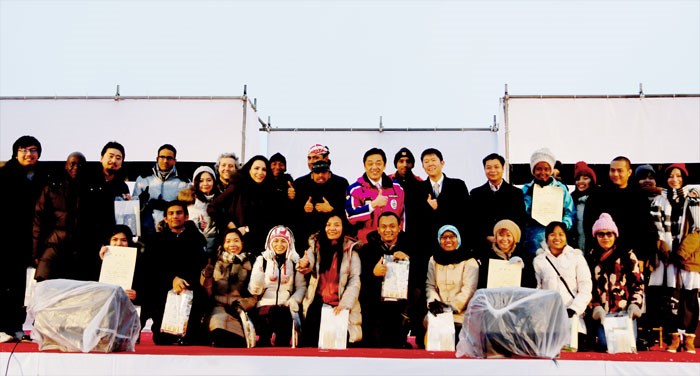 Please see websites which IUJ students made and awarded by mayor of Minamiuonuma City.

You can see other websites.