Blog - Latest News
You are here: Home / Frontpage Article / IUJ Students Awarded by Mayor on a Stage Made of Snow 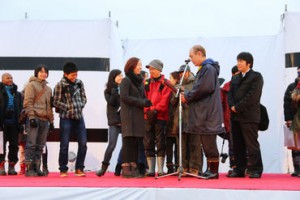 IUJ students were honored by the Hon. Mayor Iguchi of Minami Uonuma and the City’s Tourism Department for their outstanding contribution to our area on Saturday, February 6, 2016. About 30 students who took the “Foundation of Web Technologies” E-Biz class were invited to an awards ceremony held in conjunction with the 66th Snow Festival. They were recognized on a stage made of snow for their creation of promotional websites, with social media interactions, that showed off the many food attractions found in Minamiuonuma City area.

In the fall term 2015, in response to a request from Minamiuonuma City, the students of the “Foundation of Web Technologies” class, divided into 6 internationally diverse groups, created websites to promote the variety of foods available in the City.

At the awards ceremony, every participating student and their course professors were invited up on the snow stage. The MC asked IUJ Vice President and GSIM Professor Jay Rajasekera for his comments. Prof. Rajasekera first thanked the people of Minami Uonuma City, including Mr. Abe from the Tourism Department of the City, for introducing this project to IUJ, and said that students could learn not just technology, but also how to work with the community and learn a bit about Japanese culture and history as well. GSIM Finance Professor Ito who is involved with several projects with the city, including ICLOVE, also expressed his appreciation to the city. Professor Zaw Zaw Aung who co-taught the course was on a business trip and could not attend the ceremony.

Mr. Utsuda, Chairman of IUJ and former CEO of Mutsui & Co. was attending the event with a group from Mitsui & Co. and was invited to the stage by Hon. Mayor Iguchi. Mr. Utsuda, giving an impromptu speech, thanked the Hon. Mayor and the city for collaborating with IUJ for various community projects such as this Web Contest and also the Global IT Park Minamiuonuma that is supposed to open in the summer of 2016 in the neighborhood of IUJ in Urasa town.

Professor Shinoda will be the keynote speaker at the International conferen...
Scroll to top