Masaaki Shirakawa, the 30th Governor of the Bank of Japan and Professor at Aoyama Gakuin University 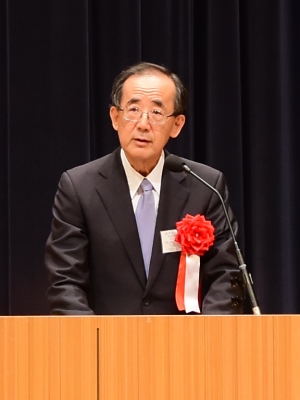 I am honored to be with you today at your commencement from the International University of Japan. I believe many of you are excited about the opportunities before you. Standing at this podium, I wonder how I felt 46 years ago at my commencement. Just a few days after the ceremony, I joined the Bank of Japan, the central bank of Japan and spent my almost entire professional life at the bank. Fortunately, central banking was a really fascinating and rewarding job. For the next fifteen minutes or so, let me talk a bit about my personal journey after commencement. My speech is about life and work.

Life is full of accidents or chance, whatever you call it. During my university time, I changed my major from law to economics. Believe it or not, the late 1960s was the age of student riots globally and it was particularly so in Japan. At my university, the students union instituted a “student strike” for almost one year and there was literally no teaching at class. My friend being hungry for knowledge set up an informal study group aimed at reading an economic textbook. Without his invitation, I would not have had intellectual curiosity in economics. In the department of economics, I was lucky enough to be taught by a professor who showed incredible skills to apply economics to various policy issues and the beauty of lucid logic and exposition. He was a really towering figure. At the Bank of Japan, I encountered mentors who taught me the spirit of central banking, when I was a junior staffer. Ten years ago, I became the Governor following complicated political impasse. Nobody including myself expected that I would become the Governor. I would say life is really strange and not something which I could control deliberately.

At the same time, life is not a random walk either. At the end of the day, I wanted to work in the public sector, not in the private sector. I wanted a job combining a reasonable amount of exposure to the real world and some academic flavor. At that time, I thought I needed to be “street-smart” to be successful in a competitive environment in the private sector. I did not think myself as “book-smart” but definitely was not “street-smart”. In this sense, I can say the basic course of my life was chosen by my own will. But what on earth is my will? I feel the distinction between an accident and will is not so clear. Both are often inseparable. If my will is not clear, I will not recognize chance when it appears. At the same time, what I perceive as my will might have been in fact a result of a series of accidents. I sometimes wonder what would have been my life, if I had not had the encounters with critical persons or events which I just mentioned. Probably, a different life would have unfolded, which may or may not have been interesting. My advice for you all is “be curious always”, which widens your horizon, perspective and encounter, maximizing your chances and enabling to discover your own will.

Work has many faces. In economics, work is treated as disutility for earning income. This is only a part of the story. Work is far more than that. It is the source of joy as well. The nature of joy of work changes over the course of one’s life. When I was young, purely knowing what I did not know was often refreshingly exciting. A self-recognition of progress could also be a joy of work. Work is inherently on-the-job training. It is investment into one’s own human capital.

These constitute joy of work, but what really makes people feel joy or satisfaction is a sense of contribution to the outer world. The outer world is different depending on the work or job. In the case of private firms, the outer world is customers. Customers pay the price for high-quality goods and services. Products offered are visible and concrete. On the other hand, in the case of the central bank, customers are the general public and its core service is maintaining the stability of the currency. This is something invisible and abstract. In addition, it is taken for granted by many people. It is like air. Because of this nature, it is very rare for central bankers to have positive feedback. But, once stability of currency is undermined, central banks are heavily criticized.

For better or worse, we had a rare occasion in which Bank of Japan was highly appreciated in the face of the collapse of Lehman Brothers in the autumn of 2008. Japanese financial institutions and non-financial firms, especially automakers, were faced with the difficulty of funding in US dollars. If the shortage of funds were in yen, the Bank of Japan could have coped with the situation by providing yen liquidity as the lender of last resort, but naturally the Bank of Japan did not have capacity to provide US dollars. How did the Bank of Japan cope with this situation? The solution was quite unusual but straightforward: The Bank of Japan entered into a swap agreement with Federal Reserve Bank of New York to secure unlimited amounts of the US dollars by pledging unlimited amounts of yen as collateral. This measure was instituted within a matter of few days without any media leaks. In retrospect, the most effective measure in averting collapse of the global financial system was this. People at Bank of Japan, of course including myself as well, worked hard day and night in a very tight schedule, and we felt rewarded indeed after many financial institutions and firms could survive financial storm and got a sense of being a part of “global team” to maintain global financial stability. I also felt happy for our young staff who had the great experience.

This experience is rather exceptional even in the case of central banks. In normal times, the job of a central bank is to achieve what people take for granted. But in reality, oddly enough, seeds of economic instability are often sown in seemingly stable economic conditions. So, somebody has to be alert and take actions in order to prevent instability, if necessary. It is the central bank that takes on this role. Chancellor Helmut Kohl in Germany once said of the central bank of Germany, “As the Federal Chancellor, I sometimes have a problem with the Bundesbank. As a citizen, I’m glad that it exists.” Perhaps, this best explain the role of the central bank. As you can imagine, the central bank could be unpopular in normal times just because of this unique mandate. Accordingly, the joy of a central bank job is not something of excitement. Rather, it is a quiet sense of contribution to society.

You are about to start a long professional life. At a certain stage of your professional life, you may be faced with a critical situation in which your life principles are tested. So was I. I was increasingly involved in the critical policy discussion and its implementation in the last 20 years or so. Particularly, in the last five years at my career at the Bank of Japan, I was at the helm of monetary policy. It is the governor who is ultimately responsible for policy and thus criticized, if economic outcomes turned out to be bad. The period during which I served as Governor of Bank of Japan, namely, 2008 to 2013 was a really turbulent period. The global financial system was on the brink of collapse. The debt crisis in Europe was so severe that people were talking about the breakup of the European Monetary Union. Japan had a tragic earthquake, tsunami and accident at a nuclear power plant. On top of that, the political situation was so unstable and we had six prime ministers and ten finance ministers during my five year term of governorship. You can easily imagine the job of the central bank becomes all the more difficult in such a situation and actually it was.

I had to confront quite aggressive criticism by economists and politicians who argued that problems facing the Japanese economy were easily solved by printing more money. I could not agree with these arguments. I thought through how I should behave as Governor. I did not want to be remembered as a governor who wreaked great havoc on the Japanese economy by adopting inappropriate monetary policy. True, nobody knows the right answer in real time. So, I always thought the central bank needed humility. But also, it needs determined will. In a critical situation, I thought I am here just to make this decision rightly by utilizing all experiences gained through my whole professional life. If I succumbed to political pressures and adopted policy which I thought were not right, and if the economy turned out to be bad eventually, I could not have endured such a situation. That would have amounted to the ruin of my whole professional life. There was no option other than to pursue what I thought was right after deliberate consideration. What is crucial is, first, humility, second, best effort at knowing right answer and getting public support, and third, determination. For me, in that sense, this was an issue of integrity as a professional.

My experience is of course unique to me. But at the end of the day, everybody’s life is unique. What I want to emphasize is that, in your long professional life, you will be faced with a situation in which your integrity is truly tested. My advice is that you should be faithful to your inner voice of integrity. I believe this is most crucial in order to gain trust as a professional.

Finally, I want to touch on a humane aspect of work. I was often asked how I was coping with stressful life during my tenure as governor. Yes, barrages of criticism were not so enjoyable, but I took it as an inevitable part of being a public official. Moreover, it is also true that I was rewarded by a lot of unforgettable touching experiences. The day after I departed the Bank of Japan, my wife and I visited a botanical garden located next to my apartment in a relaxed mode finally freed from pressures of public office. After we enjoyed the cherry blossoms for a while, we stopped by a small stand and I ordered two ice creams. The lady at the stand quickly recognized me and said, “You are Governor Shirakawa, aren’t you? I thank you for your five years of service to the country.” She refused to accept my 500 yen coin. On top of that, she kindly served coffee for free. I was so moved, of course, not because I was given a treat but because her words were so warm and resounded within my heart. Although a sense of contribution to society is important as I mentioned a few minutes ago, it is difficult to motivate ourselves just by inner voices. In retrospect, it was warm words or kindness extended by people around me, family, friends and unknown citizens that motivated me when I was faced with difficulty.

In closing my remarks, I once again want to emphasize the importance of being curious always and respecting personal integrity. Life and work are sometimes tough but also very rewarding. I hope from the bottom of the heart that your journey will be stimulating.

Thank you for your kind attention.