A Comprehensive International Relations Degree with an Asia Pacific Focus 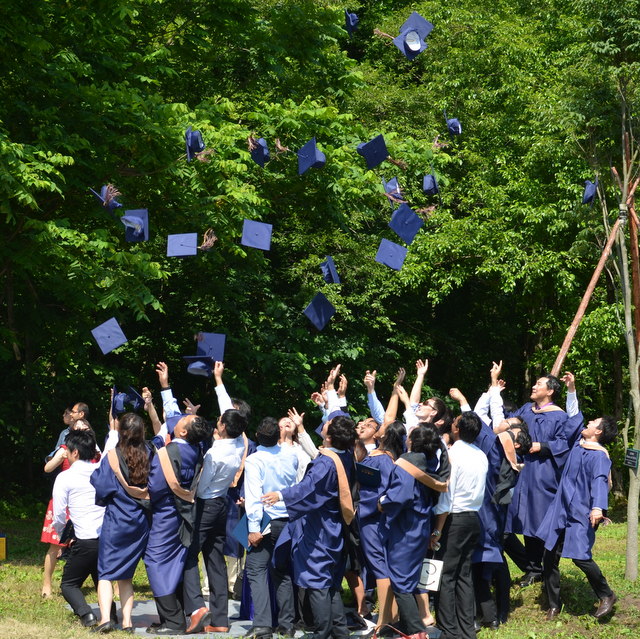 The International Relations Program(IRP) is designed to provide a comprehensive, interdisciplinary understanding of major trends in contemporary international politics, economics and society. Special emphasis is placed on developments in the Asian Pacific area and on Japan in particular. The Islamic world also receives considerable attention.

This track has proved extremely useful for people who either work in, or who intend to take up careers in national or regional governments, in international organizations, in business and finance, or in the media.
It also offers a valuable stepping stone to those who wish to pursue further studies in a Ph. D. program and enter the academic world.

Coursework and Thesis (or Research Report)

Very great importance is attached to research. A Thesis should be, ideally, an original contributions to learning, of publishable quality and of substantial length. A research report is an empirical analysis of a policy or current affairs with a certain concept/theory to an actual situation/policy or an elementary theoretical analysis of an existing concept with literature review to a lesser extent. The preparation and defense of a thesis or a research report strengthen the student’s ability to conduct empirical research, to analyze large bodies of complex data, to develop sustained and logical arguments and to write clear, succinct professional prose. These skills have proved invaluable to our students in advancing their subsequent careers.

As noted above, English is the official language of the GSIR. However, since IUJ is located in Japan, and since a deep knowledge of this country’s political culture and foreign policy, and of many wider developments in the Asian Pacific region, cannot be attained without a good command of the Japanese language, students are strongly encouraged to enroll in the Japanese language courses offered in our school. Other Asian language courses, apart from Japanese, may be offered in the future.

In its approach to education, this track has endeavored to combine the best of East Asian and Western traditions. Standards are high. Workloads are demanding. At the same time, classes are very small. This enables our teaching staff to pay careful attention to individual student needs and aspirations.

The overwhelming majority of students and many of the academics live in residential colleges and apartments located on campus. This facilitates close interaction among the students themselves and also between the students and the university teaching and administrative staff. It enables students and staff who feel so inclined to spend long hours, out of class, in coffee shops and restaurants, in hot springs or on pleasant rambles through the surrounding hills and villages, discussing the problems of the world in a free, informal and extremely relaxed manner.

Our graduates often tell us that these occasions have constituted some of the happiest memories in their academic lives.

The foundations of the present program were laid under the guidance of the former Japanese Foreign Minister, Dr. Saburo Okita, the first president of IUJ. The program subsequently developed under the intellectual leadership provided by some of Japan’s most distinguished authorities on world politics, international economics, Asian affairs, North America, Europe and the Islamic world. From the beginning there has been a strong commitment to the cultivation of an open, eclectic, non-doctrinal and humane approach to scholarship and teaching.

The Geographical Setting: A Unique Window on Japan, Asia and the World

The teaching staff and student body of IUJ are highly cosmopolitan. The Matsushita Library and Information Center houses a wide range of academic books, specialist journals and newspapers in many languages and provides instant Internet access to information from across the globe.

Despite the contemporary revolution in communications technology, however, geography, history and culture continue to play critical roles both in shaping world affairs and in influencing the way men and women interpret the flow of events.

IUJ is located in the Echigo mountains, in the Hokuriku region of the main Japanese island of Honshu, forty minutes by bullet train from the city of Niigata, on the Japan Sea, beyond which lie the Korean Peninsula, China, Eastern Siberia, Mongolia and the lands of Central Asia, all of which are rather easily accessible, by air or sea, from local ports. Seoul is two and a half hours by air from Niigata, Shanghai three hours, Sian six hours, Vladivostok a mere one and a half hours. In the other direction, to the South East, ninety minutes by bullet train from IUJ, lie Tokyo, the Kanto Plains and the Pacific Ocean. From Tokyo (Narita) International Airport, Washington can be reached in fifteen hours, Paris in twelve and a half hours, London in thirteen hours, Singapore in six hours and Sydney in nine and a half hours.

Niigata Prefecture is very much part of the Japan Sea cultural zone.

From ancient times the Japan Sea, part of an immense chain of interlocking bodies of water extending from the Sea of Okhotsk, through the China seas to the Gulf of Thailand, the Bay of Bengal and beyond, has played a significant role in forging ties between the civilizations of the north and the civilizations of the south. It has also constituted an important link between the Japanese archipelago and northeastern Eurasia. Recent decades have witnessed a gradual reassertion of these historic roles.

The Hokuriku region, with its extraordinarily heavy winter snowfalls, its warm, pleasant springs, its subtropical summers and brilliant autumns, its rich history, interwoven both with that of the rest of the Japanese archipelago and with the Asian continent, is not only the home of a fascinating traditional society but has provided the setting for some of the most visionary industrial and engineering projects in postwar Japan. It has also given birth to some of the nation’s most dynamic and far sighted political leaders.

Students are thus in a position to view the world from an unusual vantage point. Things do not always look quite the same from here as they do when seen from Washington, London, Paris, Moscow, Peking or even from Tokyo. During the two years our students spend with us, the unique geographical setting, the historico-cultural environment and the intellectual voyages of discovery upon which they embark, subtly interact to break down or modify many deeply entrenched but highly questionable views about Japan, about Asia and about developments on the wider stage of world politics.